Bodywear in general became a disco fashion sensation in the 70’s, but no other name comes to mind more than Danskin!  Anyone who has ever dabbled in the world of dance knows this brand, but Danskin also broke new bounds in street fashion when they hired designer Bonnie August in 1975.

Being young herself, Ms. August knew that people got down and got serious on the dance floor and that the practicality of bodywear coupled with the writhing sexuality of dancing was a match made in DISCO HEAVEN!  She introduced exciting new colors, shimmering textures and utilized a new fabric called Milliskin so that the leotards could also be worn as swimwear. She just knew that going from the hottest pool party straight to the Disco is the lifestyle we all want to live and she singlehandedly made it happen. The “Freestyle” line for Danskin also included unitards, leggings and the classic wrap skirt so all you needed to add was some cheek contour and a sexy pair of heels!

Yes kids, long before American Apparel revived vintage dance looks-  there was Danskin.  While they no longer make exactly the same sexified styles Bonnie August created for the Boogie Down 70’s, you can still find some great styles to work into your outfits for the Disco and the best part- they are still amazingly affordable!

”I don’t follow fashion. I like to invent it. The styles I design are based on my needs and those of my active friends.”  Bonnie August 1947-2003 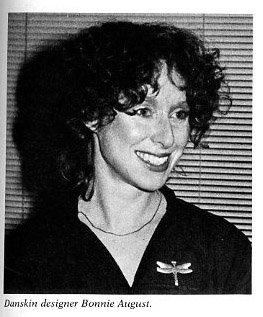