I’m sorry to bring it up again, but today’s Sparkle Video has me longing for the days when men dressed for the art of seduction.  Tom Jones has enjoyed a long career as a sex symbol and it’s not due to some form of wizardry or amazing talent.  He owes it all to his swagger, confidence and well chosen outfits that allowed his millions of lust-filled fans to visualize him naked.  In fact, I’m willing to bet that no one ever asked “How’s it hangin’ Tom?”, because he always made it quite clear and that’s exactly the kind of men we need today.  No more shirts buttoned all the way up, no more knit hats and beards that hide “come hither” facial expressions and certainly no more of this attitude that the company of a lovely sequined lady is something that comes with no effort whatsoever.  Which brings me to the other bet I’m willing to make and that’s after this show, Tom was back in his dressing room in a sparkling huddle with all of his gorgeous dancers and their equally fabulous hair-  and I’m pretty sure I’d win.

Today’s Sparkle Video features Perfume, a trio of super kawaii Japanese girls in brightly colored disco pants, who are laser addicts.  Seriously, I’ve watched a bunch of their videos and they always have lots of lasers so I’m guessing it’s in their show rider and who can blame them?  They make for a marvelous performance, especially when the music leaves a bit to be desired because while I do appreciate their “house-pop” style, my thoughts are “less Pop, more House” (and I mean a lot more House!).  However when it comes to lasers and dancing in ’em, singing in ’em and generally being cute in ’em- they nailed it.

This is my horoscope for February from the L Magazine and it’s totally on point.  Being a Pisces has always been awesome, but now the stars are giving me and my fellow fish carte blanche to dance 24/7- anytime or anywhere we feel like it!  Not that we weren’t already engaging is this dazzling behavior, but now it’s an order from the mystics.  It seems they agree that you can only find fulfillment and gratification in your life after you’ve danced your ass off and that, Soldiers, will always be APPROVED!

There’s only one word for today’s sparkle video and that’s MEOW!  Maybe my love for cats has me completely biased, but there’s no denying Arabesque’s dazzling feline power is taking full charge of the stage in sparkling leopard print outfits and supremely styled disco hair.   They’ve also added the only choice in accessories for this number: superhero belts and strappy metallic heels, which gives them the “purr”fect sultry edge for their prowl-like dancing as they sing “We’re the kitty cats, kitty cats, kitty cats… Don’t try to hide cause we can see by night”.  Truly the most adorable words ever sung by three sex kittens lit gloriously by star filters!

Halston was one of the most influential American designers of all time.  While many people tend to associate him with dazzling on the dance floor and all night Studio 54 decadence- his contributions to the fashion world are his true his legacy.

Roy Halston Frowick was born in 1932 in Des Moines, Iowa and from a very young age showed an interest in sewing and designing.  He became a milliner after graduating from art school in Chicago and then eventually moved to New York city to work for Lilly Dache´, one of the most well known hat designers in the industry.  Once he became established in the “Big Apple”, he went to Bergdorf Goodman where he made glorious head pieces in their custom salon.  It was there that he first became a household name after making the famous pillbox hat worn by Jackie Kennedy to the President’s inauguration in 1961.

Eventually, Halston moved into women’s wear and opened his own townhouse studio and by the 70’s, his simple but elegant and disco-tastic silhouettes defined the look of the era.  Asymmetrical shoulders, halter top gowns and bias cut flowing caftans, capes and sleeves- many of them sparkling madly with sequins– were all creations of his genius.  Ironically, his designs were often referred to as minimalist, but there was nothing minimal about Halston.  He used only the best fabrics like cashmere, hammered satin and yards and yards of silk chiffon, and his dresses were known for their amazingly flattering fits.  To this day his shirt dress made from Ultrasuede is still one of the highest selling in history.  He was immortalized in Sister Sledge’s “He’s The Greatest Dancer” because he dressed (and hung out with) the most famous and the most fabulous.  Liza Minelli, Bianca Jagger, Lauren Hutton, Liz Taylor and Marisa Berenson all wore “Halstons” as did the crème of high society and the jet set crowd.  Special note: it was Halston’s idea to have Bianca’s legendary birthday party at Studio 54 and that’s because he was fabulous himself!  He had movie-star looks and was always smartly dressed in his trademark black turtleneck, dark glasses and cigarette in hand.  He lived a luxurious lifestyle, partied unapologetically and traveled stylishly with his entourage of models who came to be known as “The Halstonettes”.  When they were all photographed as a group, they made the most iconic images in fashion history – not to mention their sparklingly memorable cameo appearance on the Love Boat.

Disco fabulosity aside, Halston was a true pioneer accomplishing many “firsts”.  He brought American sensibility to the forefront of the fashion world both garnering respect and stealing the limelight from Europe.  He was influential in uniform design which he created for various entities including the American Olympic team, Braniff Airlines and even came close to designing for the NYC Police Dept* (can you imagine New York’s finest patrolling the streets in Halston? Fabulous!).  He was also the first high-end designer to enter into major licensing deals as well as to be contracted to design for a chain store, JC Penney.  While the latter ventures became overwhelming and caused problems for him in the end, the fact that he took such risks was groundbreaking.  You see Soldiers, we’re used to partnerships like “Karl Lagerfeld for H&M” and “Missoni for Target”,  but back then it was unheard of. 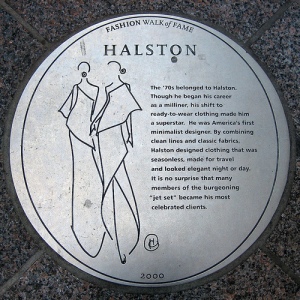 Halston passed away in 1990, and while the last years of his life and career were mixed with some downfalls, it doesn’t take away from who he was and what he gave us.  Like it’s says on his plaque in the Fashion Walk of Fame, “The 70’s belonged to Halston” and he came to symbolize the era.  He worked hard, played harder and made a lot of fabulous entrances.  He lived the life we aspire to by surrounding himself with extreme beauty, good friends and great parties.  However, more than all of that he gave us  “The Look of Disco” and for that, he is forever a Sparkle Army Hero.

(* Interview footage form  “Ultrasuede: In Search of Halston” & NY Times blog accounts are that he pitched the designs but they were never approved, contrary to many online posts.)

Today’s Sparkle Video is a result of my being home with a cold and feeling in need of some attention from the Doctor.  “Dr. Love” that is, along with First Choice who are all the medicine I need because there’s nothing like hearing that glorious beat and watching three lovely ladies in shimmering batwing tops and luminous harem pants to get one out of bed and dancing in the living room.  Plus, the added dosage of a dance floor filled with disco boys in unbuttoned shirts has me thinking I’m cured because right now- I’m wishing they made house calls.

Disco Heaven officially has an MC.  Music fans and Sparkle Army Soldiers everywhere mourn the loss of the legendary Don Cornelius who was the creator, producer, host and owner of Soul Train – a show that millions of us grew up with.  Airing from 1971 to 2006, most of those years were hosted by Don himself with the silky deep voice that was one of the most recognizable in television history.   Every Saturday we all got on board the “SOOOOOUUUUUUUL TRAIN” to see the superstar guests, amazing dancers (especially the line dance and my favorite pop n’ locker Shabba Doo), the disco-tastic outfits, the word scramble, and the unforgettable animated show packaging.  There were many versions and several theme songs over the years, but not surprisingly, my heart belongs to the one with the train chugging along to “T.S.O.P.”    Don Cornelius’ contribution to the music world and to forming us into the dance floor dazzlers we are today cannot be measured.  RIP Mr. Cornelius.