Today’s Sparkle Video was sent in after Wednesday’s post about Disco Mannequins.  It seems there’s a fetish out there for everything and these glimmering mirror-tiled ladies have their own devotedly decadent pack of male suitors. Not surprising, however, is that the President of the DMLS, or Disco Mannequin Love Society, is non other than Andy Gardiner, half of the superstar duo Den Haan.  I can totally see why he’s into this kink though, because there’s no way in the world a regular ol’ fleshy gal can compete with these exquisitely tall, sleek, perky breasted goddesses that beam and bounce light off their every curve and are gloriously always the “life of the party” (ironic, yes?).  As you can see here in “Magic Carillion”, the singing spandexed Rose is doing a bang-up job performing to a bunch of equally sassy deciples, but it doesn’t really matter because everyone knows the real star is in this video is that spinning sparkling alien behind her.

No, “Gods From Outer Space” is not another laser-laden porn movie, it’s the title of the long awaited full length album from Den Haan.  As many of you remember, they played the most dazzling live set at the last Sparkle Army party while wearing silver metallic space suits as well as brought along their massive sparkling party entourage from Glasgow. FABULOUS!  Well, they achieve top honors once again because this album speaks right to Da General’s heart as they don’t waste my time with the slow build. They go straight for the disco jugular and then rip it to shreds, just the way I like it.  It’s almost impossible to pick a favorite track, but I can tell you that spaced-out sparkle-sluts everywhere NEED this album so get it now… and that’s an order!

I’m still on vacation so my clock is a bit off resulting in a very late post of today’s Sparkle Video. Once you see this you’ll understand how my week has been- nothing but fabulous!

This  DAZZLING video was made by the Berlin Sparkle Soldiers at Chlorophorm TV and it’s all about the Sparkle Army party last Saturday which was OFF THE CHAIN!  They did such an amazing job- I just HAD to feature it this week… ENJOY!

Join the Sparkle Army last Saturday in Berlin was spectacular! With nothing more than art supplies, a staple gun and gallons of glitter- Monster Ronson’s was transformed into an intergalactic spaceship filled with the most beautiful Spaced Out Sparkle Soldiers the universe has ever seen! Also, mandatory effects like multi-colored laser beams, overloaded disco balls and gobs of smoke were dazzlingly successful in their mission! (sorry about the tickets from the fire department Ronson.. we’re still cool, right?).

I truly had an amazing time doing my favorite things: dancing chatting partying, and now I MUST thank all the people who made my dreams come true:

Monster Ronson- the man, the myth, the legend. Without him, this party could not happen… at all. You are a true friend for many reasons, but especially for putting up with the moods and demands of an aging diva!

Rebi- genius of lighting and sound, master of the staple gun and hundreds of other things- your contribution to this party is BEYOND just a thank you!

Sadie-the makeup lady for Sparkling the Soldiers up proper!

the Zentai Experience- for a Super Spaced Out Performance and being gorgeous freaks of nature!

Lendless- for sharing their very first live performance of shimmering disco jazz with the Sparkle Army!

Den Haan- for coming all the way from Glasgow Earth and rocking Ronson’s into an unspeakable orbit!

and to all of Monster Ronsons staff that work so hard to keep the cocktails and everything else about the party going!

With so much to do before Join The Sparkle Army at Monster Ronson’s tomorrow night, I almost forgot it’s Sparkle Video Day!  ALMOST. Don’ t worry though- Da General would never do that to you.

This Doris D & The Pins video is one of my favorites and is a classic in every way- the music, the outfits, the gobs of smoke. In fact, with all the disco balls strewn about, it looks like Ronson’s right now- except that we have more GLITTER, SPARKLES and LASER BEAMS!

Come see for yourself tomorrow night, September 11th… and wear your dancing shoes because this party goes on all night long and remember…. MORE IS MORE!

I arrived in Berlin yesterday morning and the excitement is overwhelming- everyone here is ready to SPARKLE UP and PARTY DOWN!  Glitter is SOLD OUT everywhere you go and talks of outfits are jamming the cell towers! This Saturday night promises to be LEGENDARY and with so many Sparkle Surprises and fabulous things to get ready, I’m unable to post as much as usual.  To make it up to you… here’s one of my favorites to get you in the mood.

Join the Sparkle Army this Saturday, September 11th at Monster Ronson’s and dance all night with me and DJ’s Emil Doesn’t Drive and SpaceLex!  Lendless and very special guests DEN HAAN are performing LIVE and don’t forget… a 50 Euro Bar Tab prize for Spaciest Sparkle Outfit!

Better than coffee, I am starting my day robot dancing to Den Haan’s “Release the Beast”. Dazzling bits of Moroder mixed with trashy computer sounds is a match made in Disco Heaven and we can all relate to the lyrics.  They’re about working hard all week long and looking forward to getting SPARKLED UP and heading straight to the dance floor to RELEASE THAT DISCO BEAST INSIDE US!

Okay, so I added the Sparkle part, but they do mention putting on makeup, so it’s a natural assumption. Besides-  it will all be true on September 11, when Den Haan plays LIVE at the Join The Sparkle Army at Monster Ronson’s in Berlin.  I’m so excited!

Normally I’d wait until Friday to post a video as sparkling this one- but I just couldn’t!  Not just because of it’s GLITTERING FABULOSITIES, but also because it’s his birthday. Yup- featuring our favorite lovable nutter Monster Ronson as the SPARKLY SPACEMAN, this promo ad for “Join The Sparkle Army” on September 11 will overcome you with Sparkle Madness!

It’s the moment you’ve been waiting for- the official invite for the next Sparkle Army party at Monster Ronson’s in magical Berlin!

If you have a Spaced Out Sparkle Outfit you’ve been gagging to wear- this would be the time!  Den Haan is coming all the way from Glasgow for an intergalactic LIVE performance along with Lendless from Berlin!   DJ’s Emil Doesn’t Drive and SpaceLex will keep you dancing all night and I’ll be there too- with SPARKLES ON!

Just when you thought it was safe to go out and not get hit by a glitter bomb, the Sparkle Army is returning to Berlin on SEPTEMBER 11, 2010. Once again, Monster Ronson’s will be tricked out with disco balls, smoke and laser beams so you can dance all night to DJ’s spinning the best in SPACED OUT SPARKLE DISCO and a very special spotlight LIVE PERFORMANCE from DEN HAAN! More details to come soon, but for now… SAVE THE DATE!

You better get started making your outfit! For inspiration and “how to” tips, check out www.mjtrim.com. I’m on my way there right now! 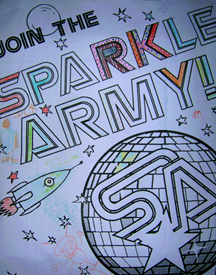